The SM57 is a dynamic cardioid microphone, so it offers high gain before feedback and can cut through loud sources with ease.

The frequency response on the SM57 is tailored to most instruments with realistic reproduction, so if you are looking for a mic that won’t color your sound there is no better choice than the Shure SM57.

If you are still not convinced about this mic’s quality or if the cost has been an issue at all, there are microphones that have comparable performance starting at around $150 US dollars without breaking the bank.

You see, they have been built to take on intense sound waves like guitars.

They really sound great on the guitar cabinet.

I usually place the mic about an inch away from the speaker, that’s where the best sound is if you ask me.

What Can You Use The Shure Sm57 Microphone For?

The article will give you a few suggestions for the use of the Shure Sm57 microphone.

For live performances, it can be used for vocals, guitar amps, drum overheads, and snare drums.

For studio recordings, it is good for vocals, guitars, basses, kick drums, hi-hats, or cymbals.

It has an excellent response to high frequencies and it provides very little proximity effect.

It needs to be used close to the sound source so that the off-axis sounds will have a minimal pickup. 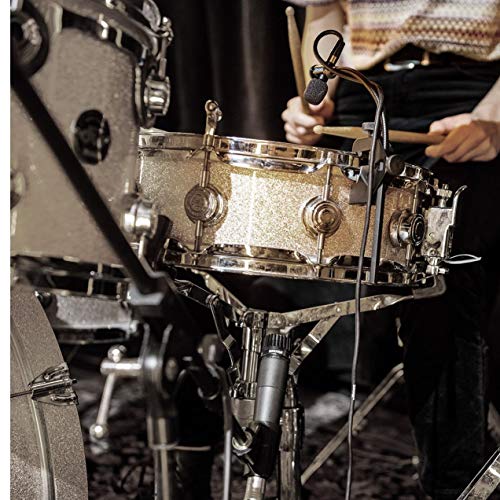 Why is Shure SM57 good for acoustic guitar?

The mic is robust and can handle high volume levels without distorting as some microphones might. It also works well with live performances because it can stand up to loud noises from instruments onstage, like amps or drums.

This microphone doesn’t come with any special features, so using one isn’t distracting in any way when you’re performing live.

Shure SM57 has a distinctive sound that’s popular among many performers.

The low-frequency boost around 100 Hz is what gives the mic its characteristic growl, which works well with drums and guitars. It can handle high-volume levels without distorting or picking up a lot of background noise, making it useful for live performances as well as recording in a studio.

You might also want to take a look at this article on the best microphones for electric guitar.

Will phantom power damage an SM57?

No, phantom power won’t damage an SM57. It has internal components that are specifically designed to handle this type of electrical current.

Is SM57 good for guitar?

In general, any microphone can technically be used for recording a guitar. However, the cardioid pattern of an SM57 makes it good for recording one source at a time (like vocals or instruments).

The low-frequency growl that this mic is known for also helps to bring out the character of a guitar.

It works really well with an acoustic guitar in particular because it can help capture the full range of frequencies that you might hear in a performance.

So if you’re getting ready to record your next song, it’s definitely worth trying out an SM57 to see what kind of sound it will give to your instrument.

Is Shure SM57 good for recording?

Shure SM57s are commonly used when recording drums, guitars, and basses. They work well for these instruments because they can handle high-volume levels without distorting or picking up background noises like buzzing amps or rattling drums.

The cardioid pattern is another benefit because this makes them versatile enough to be used in various recording settings (like live performances). You can also read more about mics for bass guitar.

Shure SM57s are another popular choice for recording instruments because they handle high-volume levels well.

If you’re wondering if this microphone is good enough to use on vocals, the answer is yes! It’s definitely not as common as it is with other instruments, but people have used the mic successfully to record vocals too.

One main difference between these two microphones is their directional patterns.

Rode NT1 has a supercardioid pattern, which means it records sounds coming from one direction better than sounds that come from all around. This can be helpful in certain situations depending on what you’re using it

How do I connect an SM57 to a TASCAM?

You would use a 1/4″ TS cable from your interface’s main output to the input on your TASCAM. The input jack will have “(line)” next to it and you should plug into that. You’ll find plenty more

Does Shure SM57 need a preamp?

No, you will not need a preamp for your SM57. But a preamp would be good to add if you want a cleaner and stronger input signal.

The SM57 sounds great being plugged straight into the audio interface – it’s a tried and proven microphone that is known for its quality.

What is the difference between Shure SM58 and beta58?

The beta 58 is a great microphone, but it’s more suited for live vocals.

The SM 58 is a great all-around microphone, and though it may not be as suitable for live use due to the lack of a windscreen and soundproofing, it will still do an amazing job!

What are some differences between dynamic microphones and condenser microphones?

Condenser microphones require power, which is why they usually need phantom power to work properly. This means they’ll always need a mixer or audio interface that has phantom power capabilities in order to work.

Some offer their own Phantom Power supply while others rely on your device’s supply instead.

Dynamic microphones like the Shure SM57 don’t require any additional power and are known for their high output levels.

They also tend to be lighter and more durable, which makes them a great choice for live performances.

Can I use an SM57 with bass guitar?

Yes, an SM57 can be used to record bass guitar. But if you’re looking for a microphone designed specifically for this purpose, there are better options out there.

That being said, the Shure SM57 is still best when it comes to recording other instruments like drums and guitars due to its cardioid pattern (which works well in noisy spaces).

The mic has also become famous for its ability to handle high-volume levels without distorting or picking up background noises like buzzing amps or rattling drums.

How do you mic a sm57 acoustic guitar?

One of the most common ways to mic your acoustic guitar is to use a Shure SM57 up close.

You’ll do this by placing it directly in front of one of the sound holes with the microphone pointing through it.

This will allow you to capture the natural tone of the instrument while also picking up some room noise, which can be blended with your recording later on if necessary.

If you don’t want any background noises, try placing your SM57 about 6-12 inches away from where you’re strumming or plucking instead.

You can also experiment with miking different areas on the guitar body for a different sound effect that works better for how you plan on using your final recording!

You can place the SM57 right up against one of your amp’s speaker cones to record a very loud and strong signal.

But if you decide to do this, make sure that your volume isn’t too high or it could result in distortion and clipping (you’ll know it when you hear it).

The best placement for recording an amp is usually on top facing down toward the speaker cone.

If this doesn’t pick up enough sound due to all the other noise coming from other speakers, try angling it diagonally instead or rotating it so that the mic is pointing more directly at the source.

A great alternative to using a standard mic like this is getting an attachment made specifically for recording guitar amps called a “DI-Box.”

This will allow you to plug your guitar straight into the box and avoid having a mic being in the way.

It’ll also turn a loud amp signal into a much cleaner sound that won’t cause any distortion problems.

To use one of these, just attach it between your amp and speaker cabinet as if it were a regular guitar cable then run a line from the “DI Out” jack on the box over to where you plan on recording.

How do you record vocals with sm57?

The SM57 is a common choice for recording vocals. You can place it directly in front of your mouth or use it at an angle if you prefer.

You’ll know that it’s facing the right way when you see some level coming through your vocal recording software.

But this isn’t the only option, so feel free to experiment with other positioning ideas to find what works best for you!

If there are any background noises or sounds while you’re singing, try placing the mic further away from your mouth instead of moving it closer since this may cause more problems than it solves depending on how loud your room is.